Janessa and I rode separate 12 buses downtown Sunday to meet up at noon at the OHS for the public celebration of their new exhibit. Not only a new exhibit, but also costumed representatives from the Portland Superheroes Coalition were on site for photo ops. Sweet! 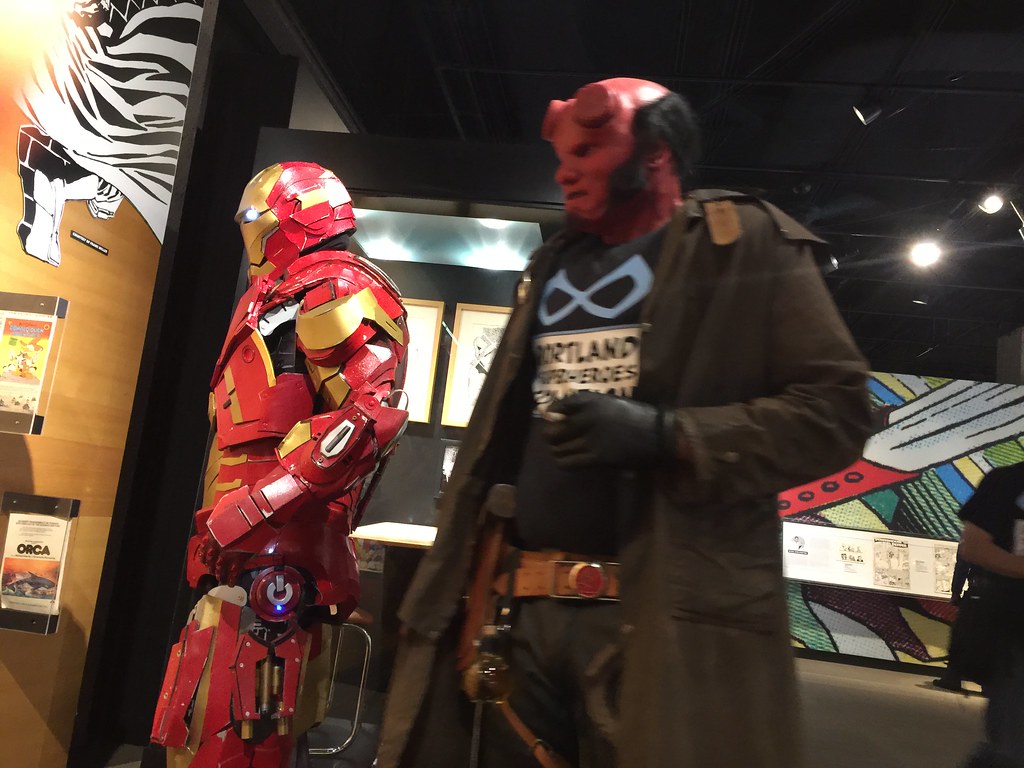 We hadn't made our way much past the first room of the exhibit when I looked back towards the lobby and saw Hellboy coming toward me. I said, "Janessa, look, it's Hellboy!" She started turning as I said look and got startled because he was so close before she heard Hellboy. (Turns out his stage name is Big Red.) Neat! I then decided to get this photo of Big Red and Metal Man enjoying part of the exhibit. I wanted to text Lamont and Leland so that they could see what cool fun we'd already found, five minutes into the exhibit! Both sons were suitably impressed. 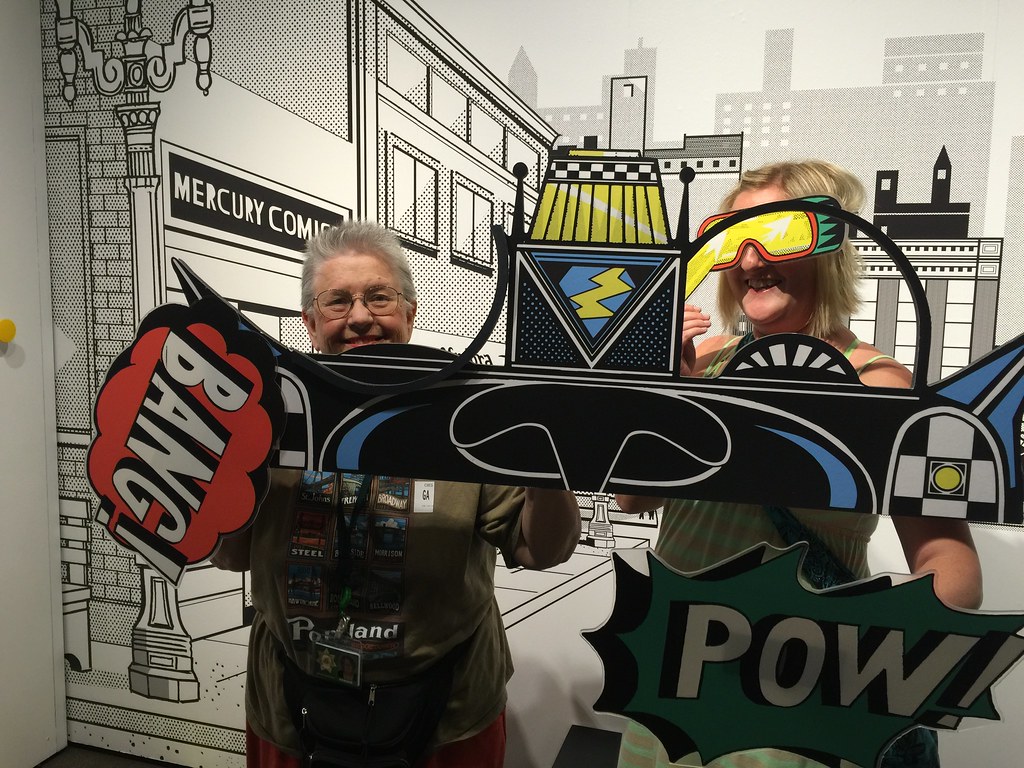 Here we are, sort of in the Batmobile. Right? The Batmobile? Holding speech bubbles! 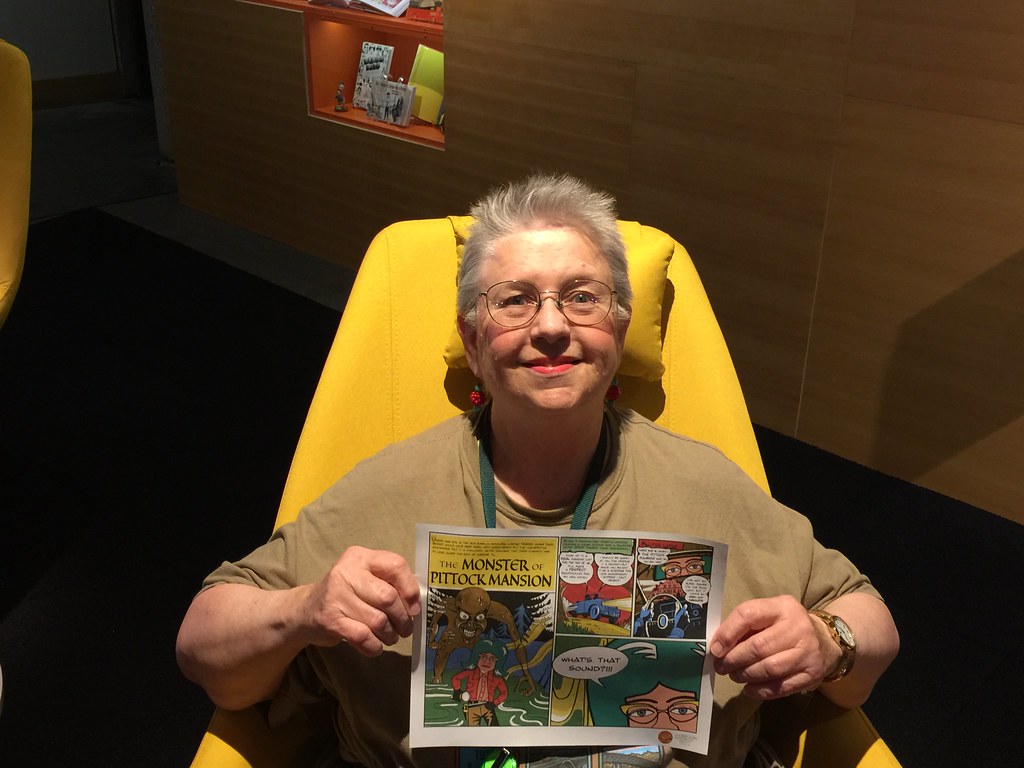 This was one of four identical yellow swivel chairs. Extremely comfortable, including a tiny headrest pillow. I'm holding my four-panel comic page that I made on a touch screen; it printed quickly, instantly dry. You get to select yourself--your person, your hair, skin, and eye color, some accessories like the eyeglasses. Then you select your story--mine is The Monster at Pittock Mansion. Before the exhibit closes, I want to go back to the exhibit, especially I'd like to do this again. I want to take my DSLR with me, too, so that I can take photos there with it. I'm hoping that Lamont and Leland will go with me. Too bad that they missed the members of the Portland Superheroes Coalition. 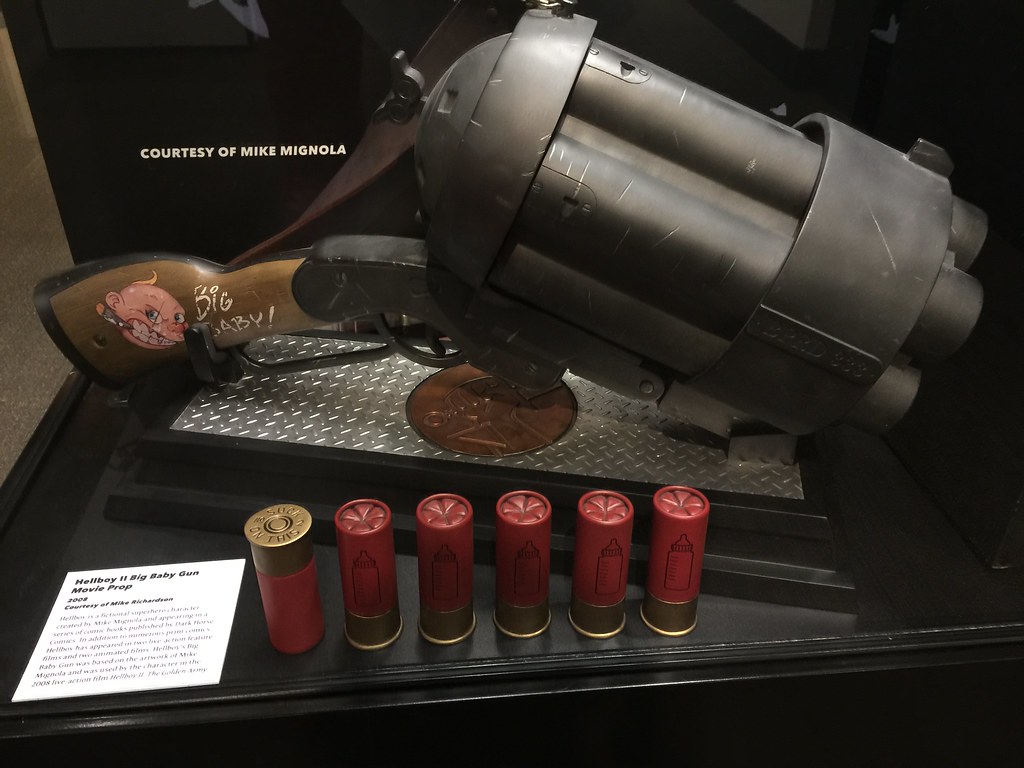 Hellboy II Big Baby Gun Movie Prop. What a whopper! And those shells! 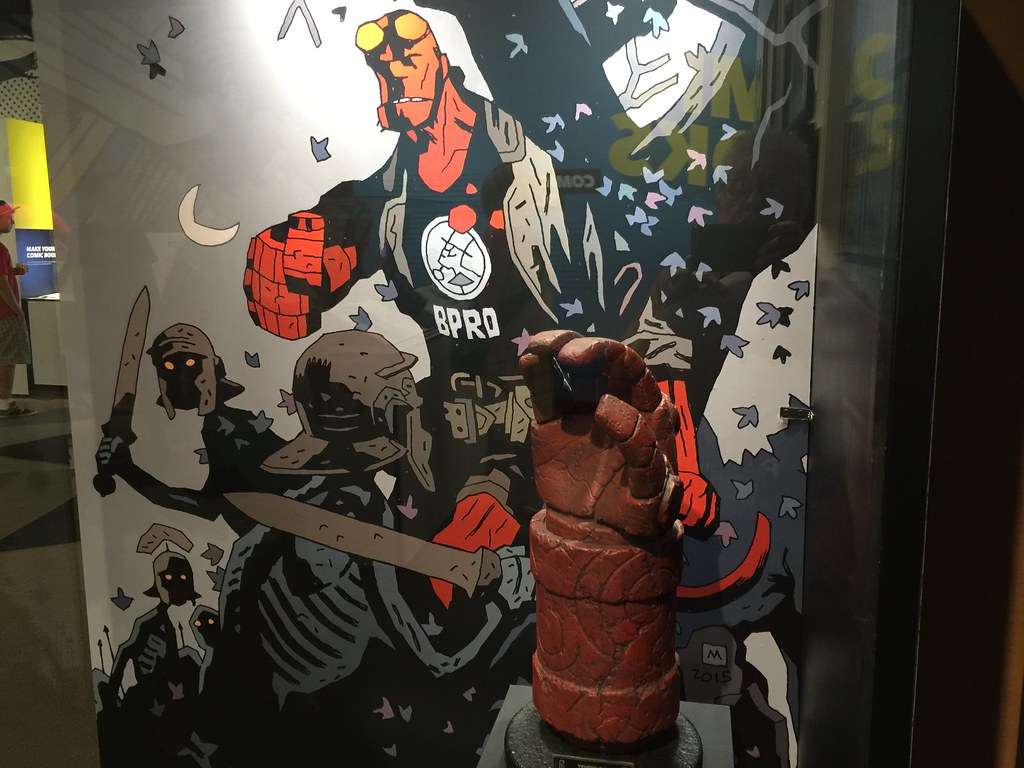 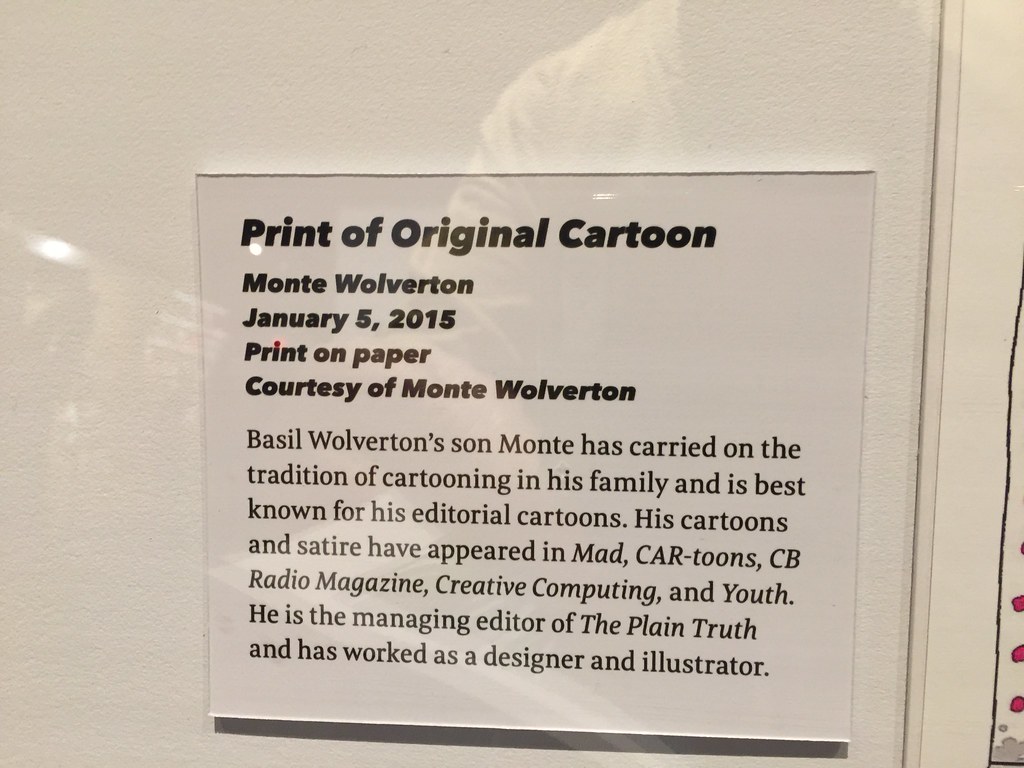 Read for info about the creator of the next image I photographed. 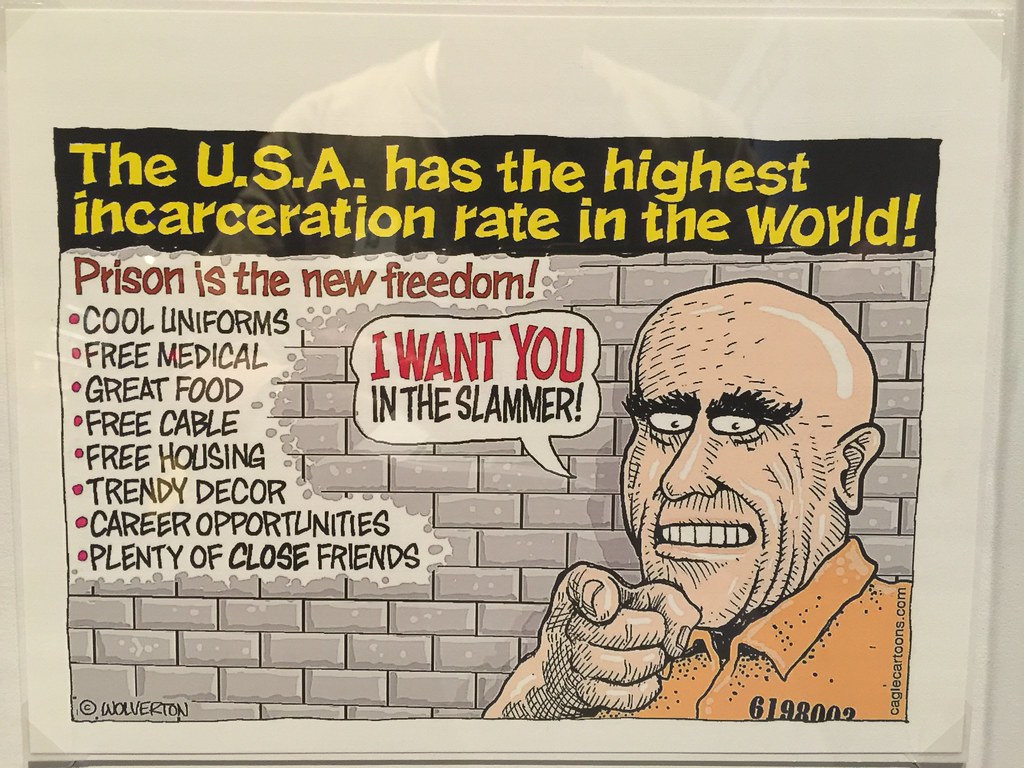 Since I work at the Multnomah County Sheriff's Office, I couldn't resist taking a close up of this one. 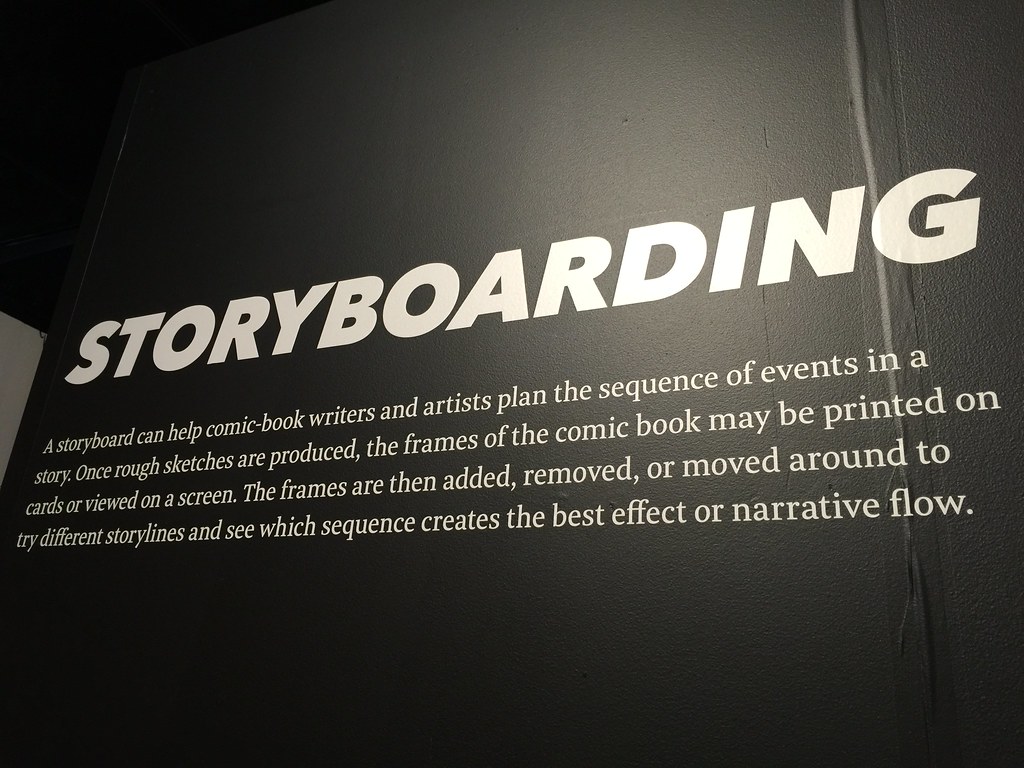 When I go back, I'm going to spend some time at this section of the exhibit. I hope it won't be too crowded. 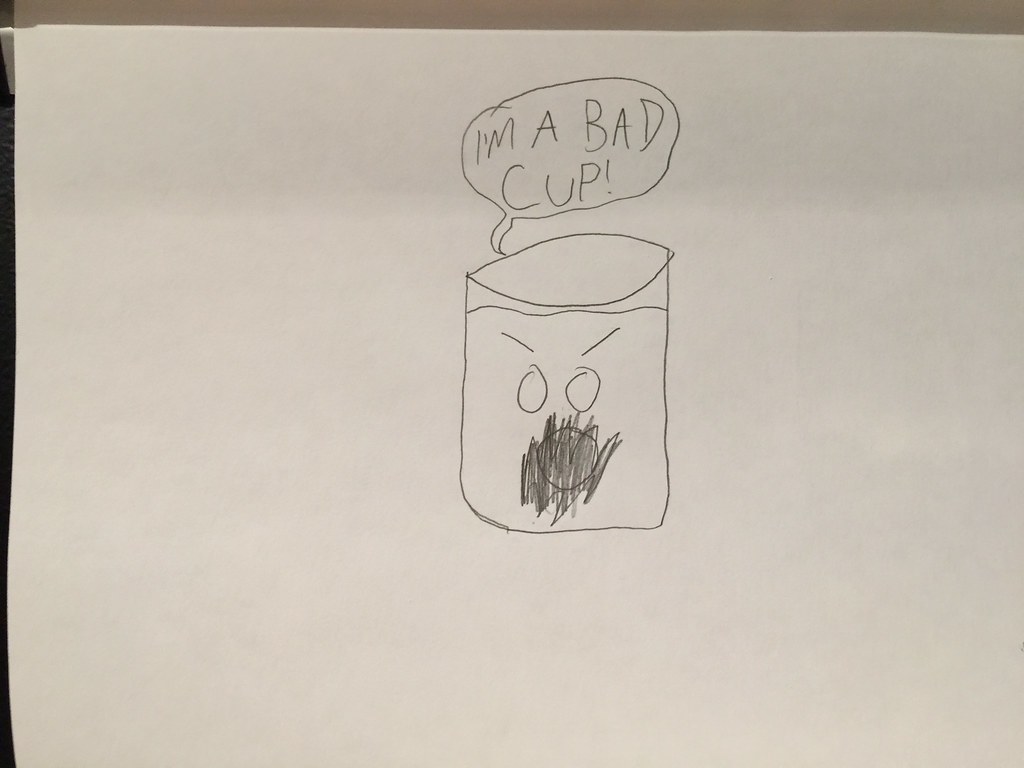 Seeing someone's idea gave me an idea of how to finish it. That's what I want to do when I go back. 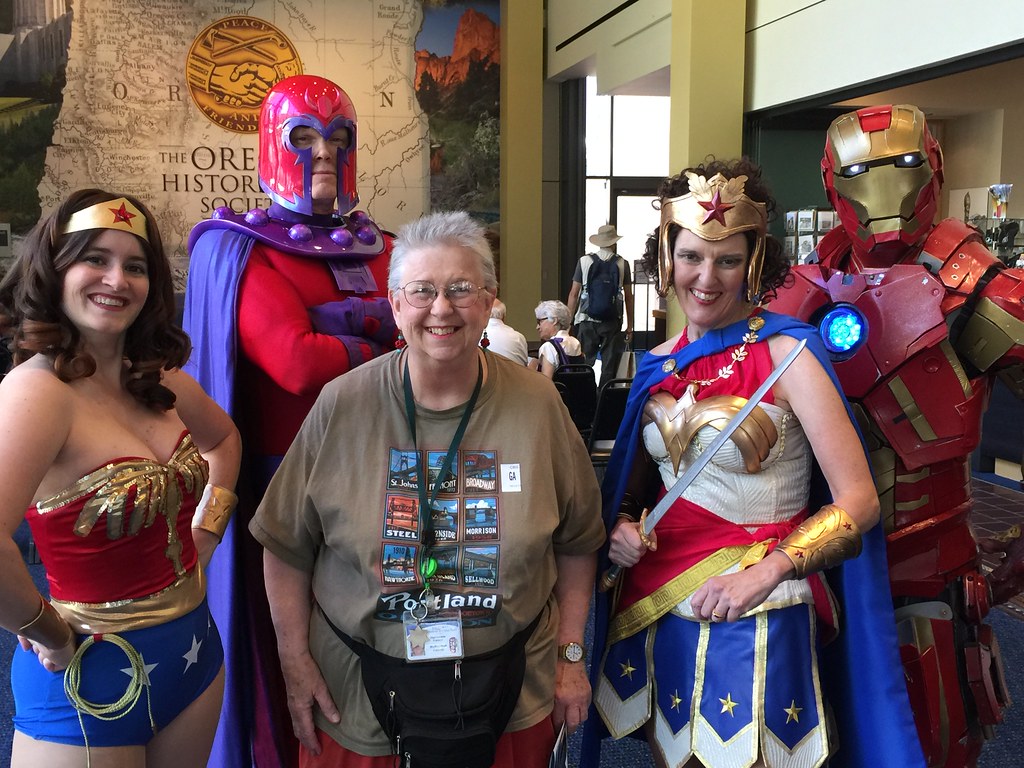 Back in the lobby, it's photo op time! Wowza Woman, I cannot find His Stage Name, Me, Wonder Mom, Metal Man! 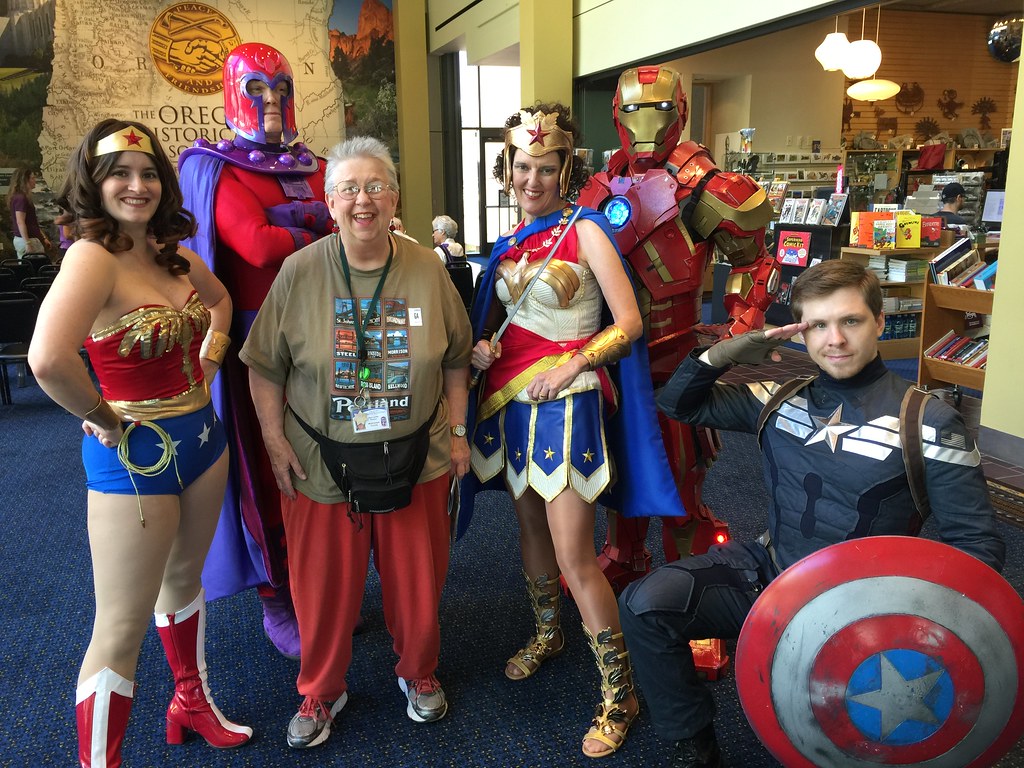 One more, with the addition of American Man kneeling on the floor, saluting us all! Lamont's response to this photo when I texted it: Oh my! A superhero among superheroes!!!! Isn't that sweet, y'all? 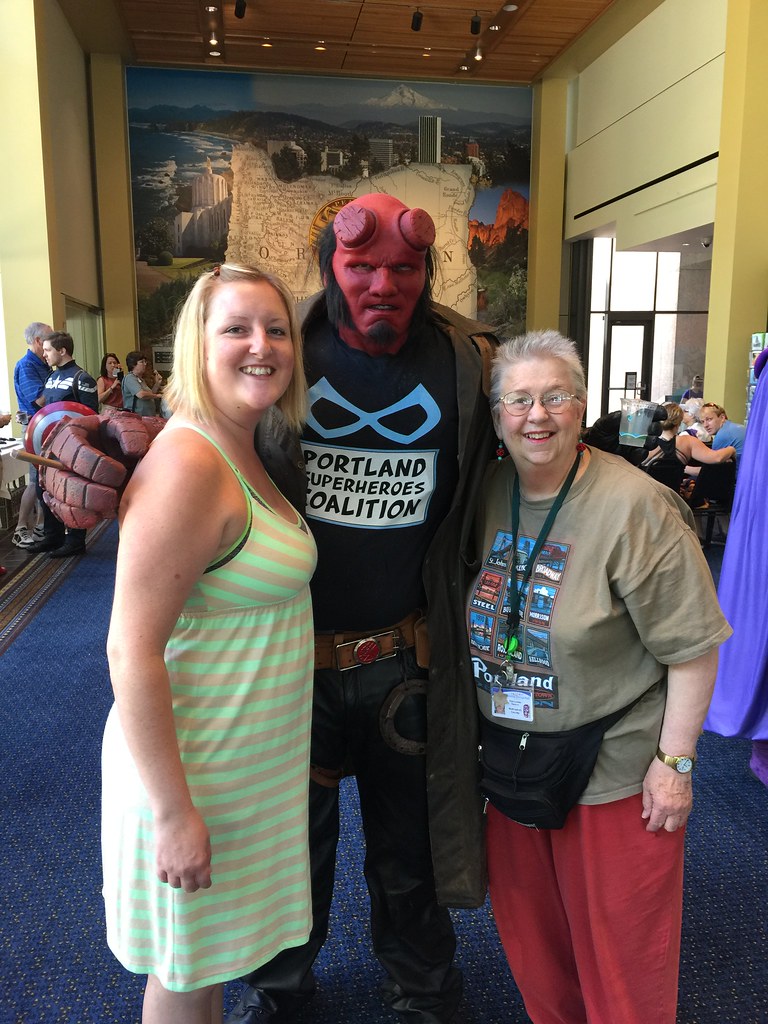 The final photo from Sunday, Janessa, Big Red, and me! He could talk! I have no idea how he made that move to talk! So cool!

With recent blockbuster smashes featuring superhero legends, the comic book industry has experienced a surge of popular support. While there are many Oregonians picking up a comic book for their first time, the comic industry in Oregon has a long and influential history. Comic City, USA celebrates this history and profiles fifteen of the most iconic artists that have made the industry into the global powerhouse it is today.

Oregon is known globally for its impact on the comics industry, with many artists, writers, and designers living, working, and discovering their inspiration here. Portland and its comic publication industry remain at the forefront of innovation as a central location to several publishers including Dark Horse Comics, Oni Press, and Shadowline, the Image Comics partnering studio. In the nineteenth and early twentieth centuries, Oregon had notable comic artists in residence such as Homer Davenport, Carl Barks, and Basil Wolverton, establishing a rich foundation for future cartoon artists. With the founding of Dark Horse in the early 1980s, a new model of comic creativity began to attract additional artists and publishers to Oregon, quickly making it one of the largest centers of comic publication in the United States.

All are invited to a public celebration on Sunday, August 14 from 12pm – 5pm at the Oregon Historical Society. Admission to the exhibit is free, and costumed representatives from the Portland Superheroes Coalition will be on site for photo ops. Artists Anina Bennett and Paul Guinan will also be presenting a free public lecture at 2pm on the evolution of the comic industry from “geek to chic.” (Janessa and I didn't stay for the lecture--we headed for lunch! Then shopping a Finnegan's Toys, Powell's Books, and Storables. Such fine fun!)

With over $579 million in national comic sales in 2015, the popularity of what is known as “The Ninth Art” is only expanding and gaining more recognition. The power of the comic industry in Oregon is undeniable, evidenced in the range of mediums at play and the growing popularity of Rose City Comic Con, which celebrates its fifth anniversary next month.

In addition to displays on each artist, the exhibition will offer interactive experiences, from a comic book store style living room for flipping through comics, a station where people can design and print their own comic book, and a photo booth complete with superhero inspired props.

This exhibition is designed to share an important part of Oregon history, inspire people who wish to communicate through an artistic medium, and fascinate those who already have an appreciation of this continuously evolving art form. As editorial cartoonist Jack Ohman admitted in an interview, “I really feel like I am doing the work of my career, and I enjoy each day. I started winning awards when I stopped thinking about winning awards. I started liking my work when I listened to my own voice, and not feeling so constrained by the old model. When you like your work, others will probably like it too.”
Posted by Lynette at 3:30 AM

Looks like you had a great time with all the superheroes.

I'm familiar with Monte Wolverton through his editorial cartoons.